Latest research from IHS Markit reveals that the global smartphone market grew by 6.1 percent year-over-year in Q3 2017, to 366 million units — up from 345 million units in the year-ago quarter.

As the the number of global smartphone users is forecast to reach 2.1 billion, here’s how the major smartphone vendors’ are faring so far:

Apple grew shipments by 2.6 percent year-over-year, as the company is beginning to see the impact of iPhone 8 and the lead-in to the availability of iPhone X. The rest of the market continues to be driven by Chinese brands Huawei, Oppo, Xiaomi and Vivo, which are all showing growth.

Apple reported a 2.6 percent growth in unit shipments for the quarter, shipping 46.7 million units in Q3 2017 compared to 45.5 million units in the year-ago quarter. Apple was able to reverse its recent performance in China and grow overall revenue in this market 12 percent year-over-year. In Japan, revenues declined 11 percent year-over-year. The Americas region reported 14 percent growth, Europe 20 percent and the rest of Asia 5 percent.

iPhone 8 devices became available to consumers at the tail end of the quarter and iPhone X devices are launching this week in stores and have been available for pre-order since last week.

Meanwhile, Apple Inc’s shares rose to a record high on Friday, setting the company on course for a valuation of $1 trillion.

Xiaomi regained a top-five spot with another quarter of significant year-over-year growth of 111.2 percent, increasing from 13.1 million units in Q3 2016 to 27.6 million units in the last quarter. Xiaomi’s result was just enough to edge Vivo and propel the vendor into the top five. Vivo fell to the number-six position with 25.4 million units shipped.

Xiaomi continued its recent growth trajectory by shipping 27.6 million units in Q3 2017, up from 13.1 million units in Q3 2016. This represents growth of 111.2 percent year-over-year — and just beating Vivo for a top-five finish by 2.2 million units. Increased retail channel availability in China and growth in its international markets, especially India, are responsible for this growth.

Samsung shipped 83.4 million smartphones in the quarter, up 7.7 percent from the year-ago result of 77.5 million units. Strong sales of the new J series, along with the launch, initial availability and demand for the Galaxy Note 8, helped deliver 23 percent year-over-year revenue growth to 27.2 trillion KRW. However, Samsung saw product mix shift to the mid to low end, leading to a 6 percent decline in mobile revenue from the previous quarter.

Market share for Samsung improved to 23 percent in the quarter, up from 22 percent in 2016. Samsung is not making strides in China, where local competition continues to gain ground.

Huawei continues to hold the number-three position globally, shipping 39.1 million smartphone units in Q3 2017 — an increase of 16.4 percent from Q3 2016. Huawei’s market share increased to 11 percent from a year ago and held steady quarter-over-quarter. The company benefits from a strong brand at home and dominance over local peers. Huawei continues to grow its international business, something its Chinese competitors continue to approach cautiously.

Companies like Xiaomi, Oppo and Vivo have placed more importance on the overseas markets. Xiaomi, for example, just announced that it will expand into Spain beginning in November 2017. In October, Huawei released its latest high-end flagship, the Mate 10 range, which the company hopes will continue to drive expansion in the premium smartphone segment.

The rest of the market decreased by 10.7 percent year-over-year. Brands like TCL-Alcatel, Meizu, Sony Coolpad and HTC experienced declines in the last quarter.

Q4 2017 promises to be an interesting quarter, as many market leaders have now introduced their flagship devices for the end of the year. Furthermore, Apple will be under pressure to deliver enough iPhone X units, while continuing to sell iPhone 8 models as well. 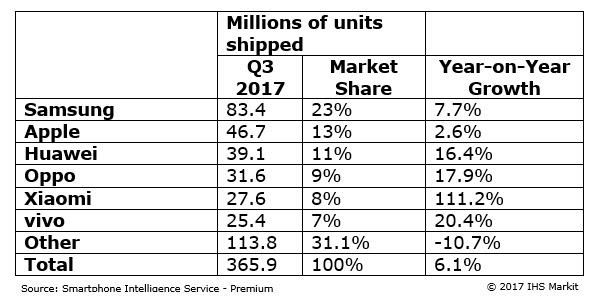