In the contest to offer the world’s most popular smartphone, it seems like the only competition that Apple has these days is Apple itself—with the company’s iPhone 11 taking over the mantle from its iPhone XR model in the first quarter.

Apple shipped 19.5 million iPhone 11s during the period from January through March, as reported by the Omdia Smartphone Model Market Tracker Q1’20 report. Despite the devastating impact of coronavirus on consumer demand, Apple’s iPhone 11 shipments in the first quarter of 2020 exceeded its total for iPhone XR shipments during the first quarter of 2019 by nearly 6 million units.

“For more than five years—even amid shifting conditions in the wireless market and the global economy—one thing has remained consistent in the smartphone business: Apple has taken either the first or second rank in Omdia’s global model shipment ranking,” said Jusy Hong, director of smartphone research at Omdia. “Apple’s success is the result of its strategy to offer relatively few models. This has allowed the company to focus its efforts on a small number of products that appeal to a broad selection of consumers and sell in extremely high volumes.” 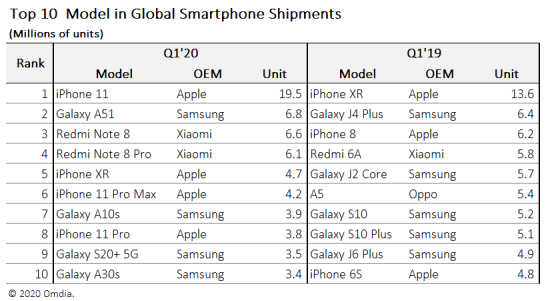 Apple managed to strike the right balance of pricing and features on the iPhone 11, ensuring the smartphone’s appeal.

At launch, the iPhone 11 was priced $50 less than its predecessor, the iPhone XR. However, despite the lower price, the iPhone 11 features a dual-camera setup that represents a major upgrade compared to the single-lens configuration for the iPhone. This enhancement has been extremely appealing to consumers, driving the increase in sales.

RELATED: iPhone XR Leads Smartphone Shipment in the First Half of 2019

Samsung’s Galaxy A51 came in second in the smartphone model ranking, with 6.8 million unit shipments in the first quarter. Samsung retained the second position again this year by successfully replacing the previous year’s no.-2 model, the Galaxy J4 Plus.

All of Apple’s four models made it into the top 10. The iPhone 11, iPhone XR, iPhone 11 Pro Max, and iPhone 11 Pro ranked first, fifth, sixth and eighth, respectively.

This represents a major improvement in company performance since the first quarter of last year, when the iPhone XS and XS Max did not rank among the top-10 models. The iPhone XR was the only new model to appear in the top-10 at the time. This year, however, all three newly released models made the Top 10.

Samsung also placed four models in the top 10. However, Samsung’s Galaxy S20+ 5G was the only smartphone from the company’s flagship line to make the grade. The other Samsung models among the top-10 were mid-range and low-end devices.

“Samsung’s flagship Galaxy S series, which was released at the beginning of the year, has faced pressure on its shipments,” Hong said. “Samsung’s move to increase the number of models in the Galaxy series diluted the shipment volumes for its individual smartphones. Moreover, the increased price tags of the new phones pushed the cost of Samsung’s flagship models beyond the realm of mass consumer appeal.”

The news for Samsung was much better in the 5G-enabled smartphone segment. The company’s Galaxy S20+ 5G took the crown among 5G smartphones shipped worldwide in the first quarter.

Huawei’s Mate 30 5G and Mate 30 Pro 5G occupied the second and third positions. Most of Huawei’s 5G models were shipped to the Chinese domestic market, and shipments increased sharply with the expansion of China’s 5G market. Samsung is launching and selling 5G smartphones in most regions where 5G services and networks are available, i.e., the United States, Europe and some parts of Asia.

However, with the COVID-19 pandemic, this smartphone market is expected to contract this year. A slowing in the pace of the 5G expansion is inevitable in many countries. 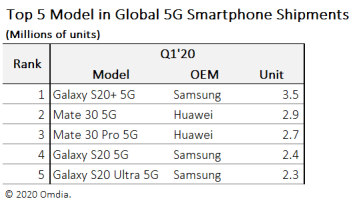